AND THEN THERE WERE NONE @ GREAT LAKES THEATER 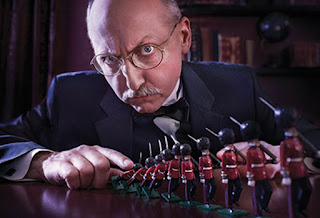 
It is a long-standing theater tradition that those who attend an Agatha Christie murder mystery must never expose its secrets to those who will be attending it next.  This tradition ends here, for this review will divulge – against better judgement and the expressed wishes of the theater’s artistic director – precisely whodunit .

AND THEN THERE WERE NONE is a typical Agatha Christie mystery, filled with plot twists and turns.  It receives a very competent, if not compelling production at Great Lakes Theater.  It is a staging worth seeing for those who are novices to the world of Christie or want to activate their “who done it” prowess and figure out the “villain” based on the new ending to the script.

Combining a magnificent set with superb costuming and impeccable acting makes this the must see production of the season for fans of gripping crime dramas.  Be forewarned that the theme of murder and violent death (combined with a truly shocking and graphic ending) may be too intense for some.

If you'd like to take a delicious bite of something really corny right about now, open wide and devour And Then There Were None, now presented by Great Lakes Theater.

Great Lakes Theater continues to "reimagine the classics" with this Agatha Christie piece in which the original bleak ending provides additional thrills to those who "remember the movie" or the play in its multiple incarnations. Directed by Charles Fee, the cast act as stylized as the set shouting from the play's start and getting louder as they are bumped off one-by-one.