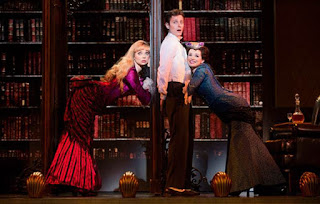 
Yes, “A Gentleman's Guide to Love & Murder” – the show that won the 2014 Tony Award for best musical – is on national tour and currently on stage at Playhouse Square.  And, yes, the award is warranted and attendance is wholeheartedly recommended.  But be forewarned: It takes a sophisticated palate to enjoy a show so silly.

"A Gentleman’s Guide to Love and Murder" is so witty and has so many deliciously comical surprises, you’ll wish you could see it twice just to take all the mayhem in again.
The celebrated musical, now showing at Playhouse Square’s Connor Palace, is one of the best national tours theatergoers will see all year, with marvelous acting, singing, costumes and production values.

The audience should also root for the book and lyrics by Robert L. Freedman and music and more lyrics by Steven Lutvak. They are new musical-theater talents who uncannily evoke the witty operetta world of Gilbert and Sullivan.
Matching ingeniousness of the material is the brilliant production design Alexander Dodge. Utilizing standard theatrical set pieces and animated computer graphics, Dodge created a theater-within-a-theater that opens up to Edwardian splendor, albeit rendered in hilariously mocking antiquity.

Add some British accents, some engaging sparkling musical numbers (one involving dancing on a casket) along with some witty comedic dialog and lyrics and even murder becomes a delight.  For those willing to pay attention, the laughs spill off the stage at an impressive rate as one funny gag after another is revealed to the audience’s delight.


Christine Howey
The sprightly music enables this serial killer operetta to charm the socks off anyone.

"A Gent's Guide" isn't tinged with the tragedy of Stephen Sondheim's "Sweeney Todd," the world's most famous musical about a prolific murder, nor does it boast number sof gorgeous and haunting . . . But the score . . . is terrifically clever its lyrics fast and fun, and written by people who love the dexterity of language.