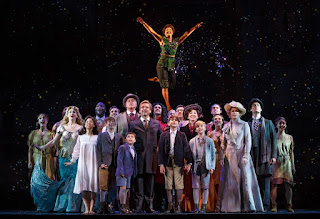 
It may help resuscitate fairies, but no amount of clapping can reconcile what the musical “Finding Neverland” is and the kind of musical it wants to be. More Lost Boy than Pan, the show crows but doesn’t fly.

For more of this review, go to www.clevelandjewishnews.com/columnists/.

The touring production of FINDING NEVERLAND is a technically impressive and nicely conceived, if somewhat stilted production.  It clearly lays the prequel story of Peter Pan with a strong score and clear story.

The most beautiful thing about the musical "Finding Neverland" is that every detail of both its story and stage production is created in the service of celebrating the imagination. ...
The national tour of the musical, now playing at Playhouse Square’s Connor Palace, features winsome romantic leads and fabulous video projections that sweep audiences up.

To see a full review of this show, read Kerry Clawson's review here

When Barrie goes on an outing one day and comes across a lovely widow and her pack of cheerfully rambunctious boys who become his muses (and no one questions they might be anything more), the location doesn’t seem so much like Kensington Gardens as “Sesame Street.”
Although scenic designer Scott Pask manages fetching etchings of trees, flowers and buildings, and the cast members look period-perfect in their Victorian costumes by Suttirat Anne Larlarb, everyone smiles too broadly, carries too many balloons, skips too maniacally (thanks to Mia Michaels’ strident choreography) and sings too many indistinguishable pop songs by Gary Barlow and Elliot Kennedy.

This is a show that the entire family will appreciate.  With over the top big Broadway numbers, delightful singing and dancing, a good moral theme and a general fun feel that makes time fly by faster than Peter Pan and Tinkerbelle.  This is a great way to share musical theater with your children.  Get your tickets quickly.

As for the show, it's produced to the hilt. But it is so much less than it might have been, with a bit more boldness on the part of the creators.