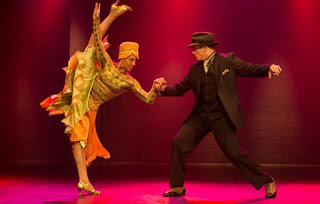 The walk back to the parking lot seemed a lot longer than it should have after seeing a musical comedy.   "Bullets Over Broadway” is a low caliber play put in a high caliber production.

"Bullets Over Broadway" is a musical that revels in its own extreme giddiness, which is what makes watching it such a good time....  Glamorous flapper and showgirl costumes by William Ivey Long are a big treat, as is the top-notch dancing.

The star turns emerge as well, but it’s never more apparent until Jeff Brooks as the menacing bodyguard with a flair for dramaturgy. He certainly struts his stuff like nobody’s business in “Tain’t Nobody’s Business If I Do.”  Fortunately, there are enough moments like this to sustain an overall satisfying evening, but ultimately, “Bullets”  just never lives up to the promise of a Woody Allen Broadway bonanza.

What a rip roaring way to kick off what promises to be a fantastic KeyBank Broadway Series season.  Bullets and laughs fly in this smart and sexy comedy that has it all…costumes, stage sets, acting, singing, dancing and story.  Grab yur fedora and dame and hop in the old jalopy.  ‘Dis is one productin’ yous dont’s wanna miss.

The sets are gorgeous! The costuming is lush and witty! But still the show labors to deliver anything close to the kind of hilarity generated by the ultimate backstage musical (also directed by Stroman), The Producers.

Top-shelf performances in 'Bullet" will go right to your head.

This is an old-fashioned musical--not in the romantic spirit of "Carousel" but in the madcap mind of Woody Allen, who stuffs two dozen songs into the show, giving a gem to every character. Flashy choreography and a breathless pace leave one exhausted at the end of the show. "Yes, we Have No Bananas" is the improbable finale.