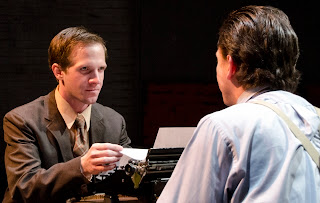 THRILL ME:  THE LEOPOLD LOEB STORY
convergence-continuum
May 17-June 8, 2013

The Leopold-Loeb story has retained its fascination, even after all these years.  Though THRILL ME: THE LEOPOLD & LOEB STORY has a somewhat flawed script and musical score, convergence continuum’s production is very  well worth seeing.  It should grasp and hold the attention of the audience.

As a musical, songs are prosaic and forgettable, with much of the music sounding alike.
Making the show compelling are the finely etched performances of Mike Majer and Zac Hudak who wear their roles like second skin as the infamous killers, Nathan Leopold and Richard Loeb.


While there are problems, ranging from a numbingly repetitious score to less than stellar voices, the two-person cast generates intensity in many small and interesting ways. And that results in a show that is weirdly compelling but not entirely satisfying.

Though nearly 90 years have passed since poor Bobby Frank's disfigured body was found in a culvert, everything about the "thrill killers" and their botched attempt to commit the perfect crime fascinates.  The same can't be said for the production now on stage at the Liminis.  Everything about it,  from the set design to the warbling of the two leads, is relentlessly flat.