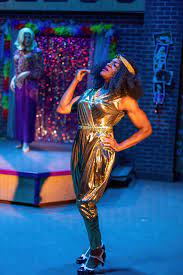 THE LEGEND OF GEORGIA MCBRIDE

THE LEGEND OF GEORGIA MCBRIDE had the potential to be a hoot of an evening. As is, it didn’t have the pizzazz to be either a fun drag show, or an escapist comedy.  The poorly conceived costumes and wigs, the lack of the needed quick pacing, and the overly long production (almost two hours without break), left too much to be desired!  Too bad…in these days of angst…a fun escape would have been nice.

It's a slight comedy by Mathew Lopez, but with the right talent and direction, it works.

One reason is Matt Gittins as Elvis/Georgia. It's an underwritten role, but Gittins musters so much power and nuance, the character -- and his drag characters -- come to life.
He and his co-star Jason Eno as Miss Tracy Mills may not be true drag queens, but with the help of Veranda L'Ni as "director of drag" and Eric Schmiedl as the plain old regular director, they light the stage on fire as well as turn up the heat of a potentially lukewarm play.

To see a full review of this show, read Howard Gollop's review here.

While a great concept, the show lacks in writing pizzazz. The humor could have been punch up a lot more as the idea was ripe with potential. Add to this the costuming, endless set blackout changes, and long intermissionless two hours it made for a long evening. Of course, the audience the evening I saw it loved and hooted and cheered through the entire show so don’t take my word for it.

It's a frothy and frequently amusing one-act that, even at a butt-numbing two hours, manages to hold one's attention.  However, a couple creative decisions and some inherent limitations in the script put a crimp in the generally excellent work turned in by the five-person cast.

To see a full review of this show, read Chris Howey's Review here.

Show business can surprise aspiring performers. Now playing in the Beck Center’s Studio Theater, The Legend of Georgia McBride lightheartedly sketches one man’s unanticipated route to success. Written by Matthew Lopez and directed by Eric Schmiedl, the show allows for plenty of laughs thanks to a small and appealing cast.