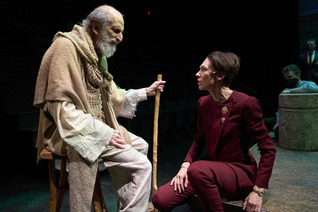 ANTIGONE, as adapted by Emily Mann, carries as important a message of the rejection or blind acceptance of the authority of civic and religious customs and leaders today as it did when the Greek Sophocles wrote the script in the fifth-century BC.  The CPH production was often successful, at other times inconsistent.

There is Theater, then there is Theatre and the Cleveland Playhouse production of “Antigone” falls strongly to the latter. In these times of world-wide pandemics, countries inching closer to the threat of world war and the dissolution of basic human rights we need a reminder from the past to show us our follies. Sophocles was on point in 442 B.C. and Emily Mann’s adaptation rings true today.

The themes that have entranced audiences for centuries are laid out in clear and often intense fashion by the talented CPH cast under the sharp direction of Lauren Keating.

To see a full review of this show, read Chris Howey's Review here.

Sophocles’ Antigone (c. 441 BC), now at the Outcalt Theatre in Playhouse Square, is a humbling reminder that human societies still have not become perfect. Director Lauren Keating makes this clear in the current Cleveland Play House presentation.

Adapted by Emily Mann, this stripped-down Greek family drama focuses on Creon, commandingly portrayed by Vanessa Morosco, and on relationships between country and family. Does family loyalty come first? Creon’s passionate young niece Antigone, played by an engaging Mariah Burks, argues yes. Or does a leader’s responsibility to the nation outweigh personal relationships? As ruler of the kingdom, Morosco’s stately Creon argues it does. Their tragic collision of loyalties justifies CPH’s trigger warnings about suicide and self-harm.