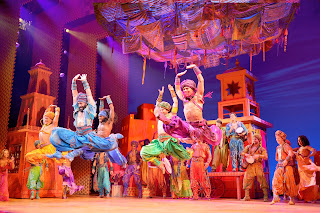 In much the same way tabbies are attracted to shiny things and rendered dopey by a hit of catnip, audiences will be drawn to and stupefied by the supersaturated stagecraft of Disney’s “Aladdin.”

To see a full review of this show, read Bob Abelman's blog here or ww.clevelandjewishnews.com/columnists/bob_abelman/

“Aladdin” is a charming, well produced, escapist musical that gets a fine production.  It’s a must see family-friendly show that should be enjoyed by everyone.

The national tour of "Aladdin" delights and dazzles, a magnificent example of classic Broadway entertainment at its best that appeals to all ages.  The Disney musical, at Playhouse Square’s State Theatre, is one of the most visually spectacular national tours I’ve ever seen, with stunning Arabian-style costumes in saturated colors by Gregg Barnes, exotic-looking sets by Bob Crowley and exhilarating stage magic.

What else could a stage adaptation of an animated Disney hit be other than eye-rollingly bland and jaw-droppingly extravagant? Yes, it’s all there: Infectious music by Alan Menken with a decided nod to Tin Pan Alley and the Cotton Club of the 1940s; richly hued mercurial sets by Bob Crowley that flip from exotic Arabian streetscapes to a dazzlingly jeweled cave; endless slinky, glittery and revealing costumes (in the G-rated realm); and a flying carpet that actually appears to be a flying carpet.

The Disney production of the musical Aladdin, now at Playhouse Square, has two song scenes that are so jaw-dropping, they don’t just stop this show, they may accidentally be stopping other shows in the area,

BOTTOM LINE: This light and happy show doesn’t break any new musical theater ground, but it’s perfectly suited for spring, flowers, and happy thoughts. On opening night, children made up much of the audience and their reactions and responses to the show were wonderful, both joyous and very immersed in the story.

"Aladdin" is a visual feast fit for a sultan, a glorious example of what we mean when we say "Broadway magic."