THE LATE HENRY MOSS @ NONE TOO FRAGILE 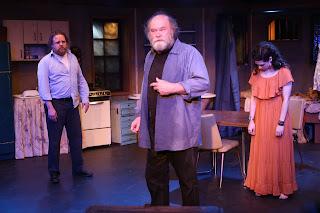 “The Late Henry Moss” is a comparatively minor work by Shepard, for sure.  But it is given a significant staging at none too fragile.

As in almost all Sam Shepard blunt, hard hitting plays, the questions of what’s true, what’s fiction, what is family history and what is mythology pervade this tale of dysfunctional relationships in this character-driven tale.  The acting is generally superb, the pace intense, and the over-all effect is unnerving.  If you like good acting and can endure Shepard’s cage-boxing style of writing, this is a production you won’t want to miss.

The dynamics between Derry and None Too Fragile newcomer Carroll — whose work has included Broadway, TV and film — are electrifying as Earl tries to dance around their painful past and Ray cruelly forces the truth out of him. We see that both brothers have inherited their father’s violent streak as these actors knock each other around the small stage in some nastily realistic fight scenes.

To see a full review of this show, read Kerry Clawson's review at http://www.ohio.com/akron/writers/kerry-clawson

Henry Moss is a less successful example of this playwright’s work, and it’s given a production that doesn’’t reach the high bar of quality that None Too Fragile has set for itself.


Is Henry Moss dead?  Or is Henry Moss teasing his sons and playing dead?  Sam Shepard, one of the best playwrights to write for an American stage, wrote a wonderful script, which challenges audiences to find truth or pretend on the stage.
To see a full review of this show, read David's posts at Talkin' Broadway