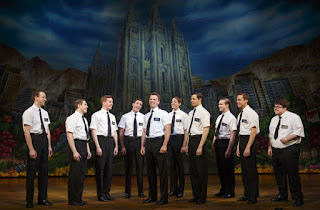 Parker, Stone and Lopez are men on a mission but, unlike the characters in their play, it is clearly not a mission from God.  They are purposefully pushing the acceptable boundaries of musical theater and having a great time doing it.

If you haven’t seen “The Book of Mormon,” or need a new shot of irreverent satire which skewers anyone and everyone, this is an absolute go see production. If you are a language prude, religious fanatic, or aren’t in the mood for ridiculous delight, stay away.  It’s everything a modern musical that is meant for pure entertainment, with a sip of philosophy, should be!

"The Book of Mormon” may no longer be the “it” show, thanks to the hip-hop “Hamilton” now ruling Broadway and the national touring scene (coming to Playhouse Square next summer). But “Mormon” hasn’t lost its edge, thanks in part to a remarkable new tour that opened Tuesday at Playhouse Square’s KeyBank State Theatre. The energy is palpable on both sides of the stage.

Mark Horning
Even after six years of tours, Book of Mormon still has sold-out venues wherever it lands and once again is filling the State Theatre at Playhouse Square with some audience members who are viewing it for the third time. Whether you are a first timer or a seasoned viewer you are guaranteed an evening of absolute hilarity. The musical comedy offers a mixture of broad farce comedy with just enough facts to keep it glued together. Go to this show with an open mind and a penchant for comedy.

In short, this show is a hoot and a half, and it is performed with superb professionalism by this touring company. Something that is not always true when a show visits for just a short time. So go, laugh, smile. You deserve it.