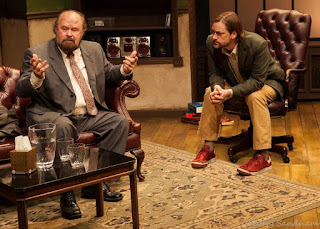 SHINING CITY is a well-written script which tells a compelling set of stories.  Past productions of the play were praised for their emotional development and wit.  Though the Beck production had some excellent performances, the pace, staging and some shallow character connections, left some of the over-all effect missing.  Hopefully, as the show runs, the performers will add some of the missing or muted elements.


Shining City is a show of subtle nuances where close attention to stance and inflection are needed to understand the purpose of the plot.  The opening night production was one of those rare instances when the show surpassed the reach of local theater and went into the realm of Broadway worthy.  The writing is smart and concise and the acting (under the direction of Bernadette Clemens) well balanced.  This is a great date night debate show to see.

It’s a fascinating construct in theory, but at the opening Saturday performance the balance was ever so slightly off-kilter, turning McPherson’s naturalistic dialogue into a procession of truncated affectations and half-finished thoughts.