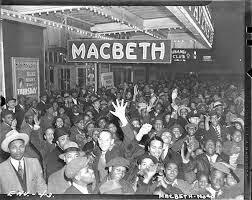 
Ensemble Theatre, in partnership with the Cleveland Shakespeare Festival, has dusted off and restaged Orson Welles' 1936 adaptation of "Macbeth.”  But it is unclear why.


“Voodoo Macbeth,” a production of Ensemble Theatre in collaboration with The Cleveland Shakespeare Festival is an ambitious project of a historically important theatrical script.  The play requires a level of acting that is beyond the training and talent of most of  the cast, thus the experience is less than it could have been.
To see a full review of this show, read Roy Berko's blog here.


The production of “Voodoo Macbeth” by Ensemble Theatre is neither great nor terrible.  It lies somewhere in the middle.  Good acting by some, tarnished by not so good acting by others, makes for an uneven 90 minutes.


Christine Howey
Directed by Celeste Cosentino and Tyson Douglas Rand, Voodoo Macbeth offers many stellar moments, a number of them revolving around Carly Germany's compelling presence as Lady Macbeth. But one wishes the production designers had gone for broke a little more and tried to capture a bit of the outrageous energy that Welles infused into his legendary interpretation.