FLASHDANCE THE MUSICAL @ The Palace Theatre 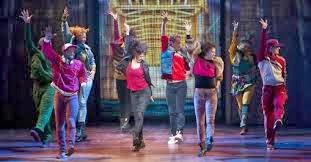 It was announced on NPR’s “All Things Considered” last week that a remake of the 1941 classic film “Citizen Kane” is premiering in Toronto.  Starring in the movie is Keanu Reeves as Charles Foster Kane.  This story, of course, aired on April 1.


Watching “Flashdance: The Musical,” currently on stage at PlayhouseSquare, is like April Fool’s Day all over again.  A musical based on a dated, music-video-inspired film about a female welder/exotic dancer who wants to be a ballerina?  Really?  A show that never actually played on Broadway being a part of the Keybank Broadway Series?   April Fools!  Right?

“Flashdance: The Musical” is all glitz and no guts.   Its only saving grace is a hard-working cast and the fact that that Keanu Reeves is not among them.

“Flashdance The Musical” is one of those musicals that delights audiences, while not being a well-written show.  It has strong music, great choreography and Corey Mach, local kid makeing good.  That ought be more than enough to please the Cleveland faithful.
To see a full review of this show, read Roy Berko's blog here.

It's been 30 years after Hollywood unveiled the rags-to-high-heels-and-rags saga about a would-be prima ballerina who's been molded out of the steel mills of Pittsburgh. By golly, that leg-warmer-clad heroine is still the "Solid-Gold" maniac to be reckoned with today.

It turns out "Flashdance" is no flash in the pan.


“Flashdance” is one of those shows that we wait the entire season to come around.  It is a superb evening of musical escapism that is the hallmark of great Broadway type shows even though it is not a true “Broadway Production”.  In spite of the fact that it is a bit farfetched and weak as far as story line, it is the superb cast that pulls off the exceptional magic.   I fear that tickets may be scarce for this production.  If you have not already ordered your tickets I suggest you do so without fail.
To see a full review of this show, read Mark Horning's blog.

Christine Howey
This is a production that seeks to pummel the audience into submission with deafening music, cornea-searing laser lights, 80s pop music and dance steps of every description. What is missing is any emotional clarity or honesty.

"Flashdance" is a classic yarn with a timeless theme. At its core, the piece is really all about following your dream, obstacles be damned.
To see a full review of this show, read Andrea Simakis' blog or visit Cleveland.com here.

It's a movie from the 1980's that has been enhanced and expanded to fit perfectly with the hip sensibilities of today's younger theatergoers. The cast are best in the first act's ensemble dance numbers, but the new songs lack variety to this older pair of ears.